Oh give thanks to the Lord; call upon His name;
make known His deeds among the peoples!
Sing to Him, sing praises to Him;
tell of all His wondrous works!
Glory in His holy name;
let the hearts of those who seek the Lord rejoice!
Seek the Lord and His strength;
seek His presence continually!
Remember the wondrous works that He has done,
His miracles, and the judgments He uttered,
O offspring of Abraham, His servant,
children of Jacob, His chosen ones!

One thing to help us in a visible, tangible way to remember our nine sweet babies in heaven, giving us fodder for conversation about it, and to be a sort of picture to our children here is to release balloons into the sky. I know it may seem like a silly sentimental thing to do, and I won’t deny that there are aspects of silliness & sentimentality here. But I’m okay with that. I love that my kids played with balloons and then said goodbye to them. I love that my kids each had three white star balloons to let off into the sky (3×3=9). I love that (simply due to the nature of having three little kids be in charge of letting off nine balloons into the sky) not all of the balloons were let go at once ~ in fact, they were let off in sets of 1, 6, and 2 which incidentally is the way my babies in heaven have been grouped as well (one before Gabriel, six between the boys, two this year). I love that my kids shouted cheerfully after the balloons, everything from “goodbye balloons!” to “brothers and sisters, we love you!” to “we hope you reach heaven, balloons!” and the boys wanted to be reminded of all their brothers & sisters’ names. I love that we got to talk about heaven, God’s sovereignty, the gift of life, contentment while still desiring more, remembering God’s works, living mercifully together in community. And balloons. We got to talk about shiny white star-shaped balloons too. 🙂

It was silly. Sentimental. Sweet. Tangible. Visible. Fun. Bittersweet.
And in a situation that is often filled with just tears and emptiness and unanswered questions, those are some pretty great adjectives.

Here’s a small glimpse into some of that. And yes, it got dark between playing with the balloons and actually releasing them into the wind. So we added some glowstick wands into the mix. 🙂 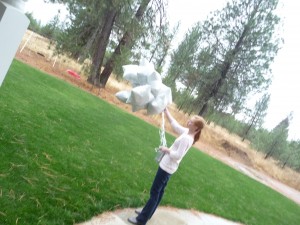 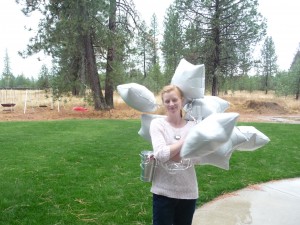 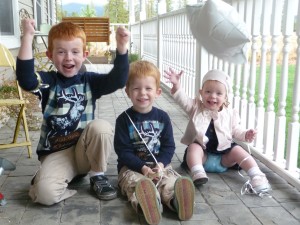 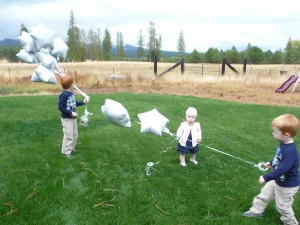 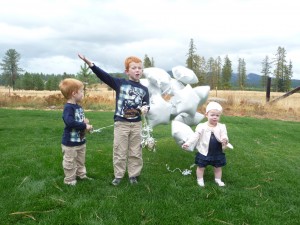 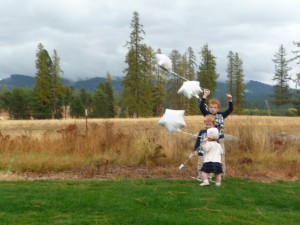 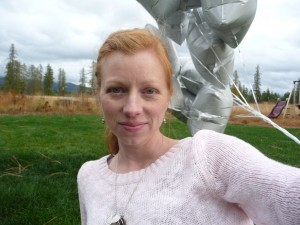 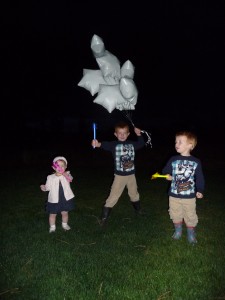 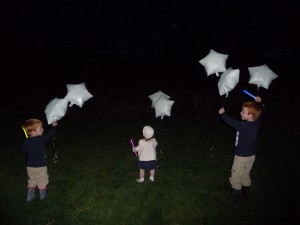 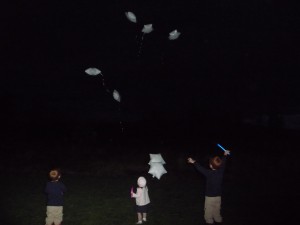 Praise the Lord!
I will give thanks to the Lord with my whole heart,
in the company of the upright, in the congregation.
Great are the works of the Lord,
studied by all who delight in them.
Full of splendor and majesty is His work,
and His righteousness endures forever.
He has caused His wondrous works to be remembered;
the Lord is gracious and merciful.
He provides food for those who fear Him;
He remembers His covenant forever.
He has shown His people the power of His works,
in giving them the inheritance of the nations.
The works of His hands are faithful and just;
all His precepts are trustworthy;
they are established forever and ever,
to be performed with faithfulness and uprightness.
He sent redemption to His people;
He has commanded His covenant forever.
Holy and awesome is His name!
The fear of the Lord is the beginning of wisdom;
all those who practice it have a good understanding.
His praise endures forever!