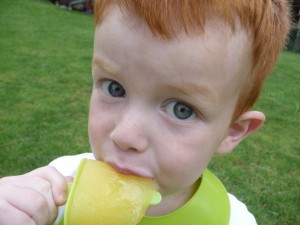 One of my greatest tasks these days is parenting Gabriel. There are so many facets to this calling of mine! It is my greatest joy, privilege, responsibility, time-consumer, and challenge. For instance, click here to read another great article by Rachel Jankovic on the calling of motherhood—it isn’t a leftover activity for someone who is mediocre at everything else, and it isn’t something to pursue because you happen to think kids are cute: it’s a righteous calling, and if God blesses you with it, you ought to rejoice and embrace it because you are forming generations in each child you raise in your home. It’s so huge. But Rachel puts the hugeness into a concise little article you’ve simply got to read. Really. I mean it.

Okay. Plug for that article aside… I am more thankful that I can tell you that God has blessed me with the privilege of being Gabriel’s mother for over three years, and I am humbly excited about continuing on this journey for the rest of my life! Parenting changes over time, but it never goes away. It’s a fluid calling, though, and I am constantly praying for wisdom in how to adapt to the ever-changing aspects that God calls me to incorporate into my parenting skills-set.

The spiritual aspect of parenthood is, obviously, probably the most important and prevalent. It isn’t just what I teach Gabriel with my words that teaches him about his God or trains him in the ways of the Lord—it is everything about my life. How I interact with him, how I interact with others, how I show respect and love for his father, how we speak about his siblings, how we treat our home and our family and our neighbors, how we prioritize, the things I do and say and am from day to day! I am prayerfully seeking to live out a beautiful gospel to him so that God his Father would be more attractive in his eyes due to the way he is discipled and parented, rather than less so. Gabriel loves to pray and sing, he loves to have us read the Bible to him, he loves communion, he loves church. Really, he just loves to worship his Creator! It is beautiful to see him growing up as a child of God. I am so thankful to know that he belongs to God. It is beautiful and humbling. If you ask him, “Gabriel, who do you belong to?” he will readily tell you, “I belong to God”—nobody can doubt it.

At church, Gabriel has the blessing of sitting with not only his parents but also his grandparents. It is a blessing to have generations worshipping together in a single pew. Gabriel sits, stands, kneels, prays, sings, holds his Bible during Scripture readings (he wants to read along, but of course that’s a work-in-progress…), and sits quietly during sermons (he likes to play with Grandmama’s bracelets, or draw in his notebook, or “read” his Bible, or sometimes eat funfruits…). He loves to put his hands up at the end of the service when we sing the Gloria Patri. I frequently am up on stage playing piano, and sometimes I’ll see him signaling to me “I’m obeying, Mommy” because he loves to obey and please his parents and “make God happy.”

We are continuing to work on catechizing Gabriel, although I’ve been taking it slower than I had originally hoped. It’s my fault, not Gabriel’s. He latches onto things much more quickly than his mother does. I am thinking of starting to have him memorize some little Scripture verses. He has already memorized so many psalms and hymns and liturgical songs, so I know he could do it easily. I just have to pick which ones to start with him.

Discipline is an area of parenting that really does change frequently as the child grows, as the sins change, and as we mature together as a family under God’s guidance. We are constantly seeking grace and wisdom from God our Father as Steven and I desire to raise our son, and discipline him, according to the nurture and admonition of the Lord.

Gabriel is very receptive to discipline, he knows the beauty of forgiveness (both giving and receiving), and his confessions of sins (especially for ones I don’t see him commit) are humbling and beautiful examples even to his own mother.

I am learning to be more vigilant in some areas and more lax in other areas as Gabriel grows and boundaries change. It is a challenge for me, but I am thankful for the grace God gives me in this.

I am also endeavoring to remember not to “share” my son’s particular sins in public. That is something that I think is really important, and so I am seeking to be diligent in that. I don’t think it’s wrong to say to another mom, “I’ve been there” or “we’ve struggled with that too” for the purpose of mutual edification in godly motherhood. But I am not going to vent to someone about a sin my son committed or go into detail about our struggles in a certain area—I want my son to grow up knowing that his parents have always respected his position in our home and that when we forgive him for a sin, we seek to emulate God by putting it as far from us as the east is from the west. I seek wisdom and diligence in this as well. 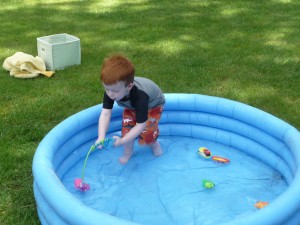 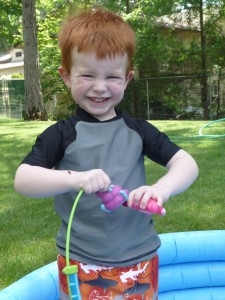 This boy of ours loves such a variety of things! He loves to cook and clean and shadow Mommy all day; he loves to mow the lawn with Daddy and go to the hardware store with Daddy; he loves lemonade, cherries, ice cream, and root beer; he loves to play computer games (Grandpapa taught him how to play cards on his desktop and he can do Hearts all by himself!) and board games; he loves T-ball and soccer and all sorts of running games; he loves to be tickled and chased and play hide-and-seek; he loves going for drives in the car and he loves being at home; he loves spending the night at my parents’ house and he loves going to our new house to see what our builder (who he admires) has been up to and he always asks to see his room and Baby’s room.

Gabriel enjoys playdough and coloring and painting and stickers and “writing his name.”

He loves to cuddle in bed with us (he adores Saturday mornings just for that reason), watch movies together (we’ve taken to doing family movie nights occasionally, usually streaming Thomas The Tank Engine or some equivalent), read books for as long as we’ll oblige, and he has a fascination with pulling up my shirt and talking to Baby and trying diligently to feel kicks & wiggles.

Our boy can make anything into a toy, which I know isn’t unique to him but it still cracks me up. So often, even an hour after he’s been in bed, we’ll hear him talking to his hands (usually one is Gabriel and one is Grandmama) and taking them on a bulldozer ride. He has a really active imagination and loves to play with invisible things, which of course keeps me guessing as to what he’s doing or who he’s playing with.

Gabriel loves photography—and I have to say, he’s got talent. He has his own little Fisher Price digital camera, but he much prefers Mommy’s or Grandmama’s real digital cameras. He takes great pictures, centers things, and is actually surprisingly artistic with some of his work. We’ve talked about printing them up into a book for him of his own photography.

Gabriel loves learning. He is going to push me hard as a homeschooling mom, I think! He knows lots of colors and shapes, he knows all his uppercase letters and most of his lowercase letters, and we’re just about to start working hard on numbers now. Although I tried doing some sit-down type preschool things with him when he was 2 ½, I learned that it just wasn’t the right time for us. But now at just over 3, he seems more interested and like it would be something he would truly enjoy. So I am thinking of incorporating some more Totally Tots type things into our life over the next couple of months, and seeing how he likes intentional learning time with Mommy. I think he will enjoy it… but we’ll see how it progresses. 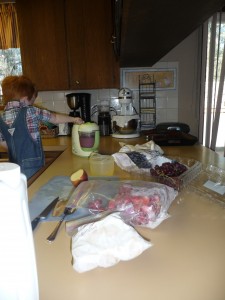 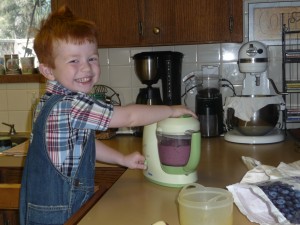 Besides getting ready to start some more intentional, purposed learning (I guess you could call it “preschool” but that term sometimes turns me off, honestly) with him—like recognizing numbers, getting more confident with lowercase letters, beginning math, etc—we are currently working on a few other things as well.

Beginning today, we are doing the hard work of giving up thumb-sucking. Ack! It’s a pretty big deal for this mommy actually. We’ve been gearing him up for it over the last week, telling him that we would soon be instituting a rule of “blankie and thumb are only for in bed” (because he only sucks his thumb when he’s got his blankie)—and then today we instituted it. So far he has been very brave and compliant, for which I am so thankful. He likes being a big boy, so he understands that this is one of those steps in growing up. We have been so thankful that Gabriel has been a thumb-sucker (from about three months old!), so it’s hard for me to be excited about asking him to work on giving it up. I realize it will be a process, and it will likely have its ups and downs… unless, of course, it’s as simple as potty training was last winter! God gives great grace even for these “small” things we work through; what a blessing!

Another thing we are working on is speaking to strangers. Gabriel vacillates between two extremes: talking peoples’ heads off and not wanting to respond at all. I know this is very normal for a three year old, but it’s something we are working on balancing. It is another obvious work in progress, and I am thankful that we’ve got a smart, diligent, obedient boy to be working with. That’s another great blessing.

Besides being thankful for Gabriel’s life, curiosity, tenderness, energy, and stamina, we are also thankful for the testimony he is of God’s grace—in our home as well as in public. We prayerfully seek to use this testimony for the furtherance of God’s Kingdom and the glorifying of Him alone. In our home, in our neighborhood, at church, amongst our friends, at the grocery store… in all of these places, we are thankful that God gives us an opportunity to show His faithfulness and kindness simply by having Gabriel’s life present with us. We are thankful that His grace is evidenced in Gabriel’s growth, attitude, vivacity, and demeanor.

As we seek to be good stewards of this tremendous blessing, we are humbled that God has chosen us for this calling. To show God’s covenantal faithfulness to the watching world is humbling to us and glorifying to Him. Thanks be to God!

2 Replies to “UPDATE on Parenting [Gabriel]”